PocketBook-360 is just one of the many devices that make reading and finding content go the “green way.” At just 5″, the 360 is a compact and good-looking device. Using this device enables you to save the trees while reading conveniently. Once you get your hands on this, you’ll wish you had embraced high-tech over your traditional reading habits sooner.

PocketBook Global is a joint Taiwanese-Ukrainian company, and the PocketBook-360 is its second device in its eReader line. The 360’s makers are dedicated to improving eReading, so it’s no surprise that this latest model is lighter and more compact than the Pockectbook 301 that came before it. 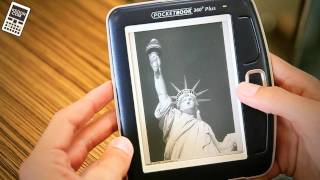 The high res e-ink screen display makes the reading experience even more enjoyable. Its 16 gray scales approximate real paper almost exactly — fittingly, because the 360 is designed to be as close to traditional reading as possible. The 360 turns pages smoothly and without flashes, while some e-readers suffer from the flash effect, including the Sony 505.

The PocketBook 360 clearly had a great deal of effort put into it. There’s a protective screen cover that is detachable, almost making the reader look like a nice handbag when it’s on the display.

Providing more protection to the unit, the cover adds virtually no weight at all. It is simple to view folder information, and three methods are available to view files by: book covers, detail, or list. Another great benefit is that the user can replace the battery.

The PocketBook 360 is one of the smallest eReaders at only five inches. There are some advantages to the palm size, one of those being easy portability. It can be easily carried with one hand or inside your pocket.

The size makes it less than ideal for longer reads. Included are all the standard e-reader features, but there’s no wireless, so you can only download content if you have a mini-USB connector.

If you want an eReader that is simple yet user friendly, the PocketBook 360 is a good choice. The $150 price tag makes it too much to recommend to those in the market for an eReader who live on a budget.

Even though, the PocketBook 360 reads a wider range of formats and is quicker and more responsive than the Sony Pocket Edition, it also costs quite a bit more at $239. This is $40 more than the Sony’s eReader, and that device has access to a larger eBook store.

The design of the PocketBook is excellent, but it just doesn’t match up to its peers in content. We recommend spending the extra twenty to get the Kindle, Nook, or a different eReader that is connected.

The PocketBook 360 measures 5.5 by 4.6 by 0.5 inches, which is smaller than the $199 Sony Pocket Edition even though the screen sizes are the same. Two large page-turning bottoms are located left of the 5-inch E-ink EPD, or electronic paper display, and a navigation pad with directional buttons and an Enter button is on the center. The top edge contains just enough room for the power button and a microSD card slot. The mini USB port for the 360 can be found on the bottom edge.

The design of the 360 is ergonomically correct while remaining simple. We like the lightweight design; at 6.6 ounces, it’s comfortable to hold no matter how we hold it. The handy cover is included. This is a very elegant item, etched with a diamond pattern. It easily snaps on the front of the device to protect the screen when you are not using it. It snaps onto the back to keep it handy, yet out of the way while you read.

The cover is unobtrusive and doesn’t make the device much thicker at all. At first, it was difficult getting used to snapping it to turn it off or on, but it becomes habit after a few days.

Because the PocketBook 360 has so few devices, the interface is naturally going to be simple. The nine chunky icons on the home screen make us think of the Sony Touch Edition. At the top of the screen, you will see the last two books opened.

Following that are icons for Notes, Calendar, Settings, Favorites, Photos, Dictionary, Applications, Books (Library), and downloaded News feeds. The d-pad is responsive and makes navigation easy, and because you can move one page forward as well as up and down, lists aren’t as tedious to navigate through.

Users can press and hold the Enter button to launch menu options while reading a book. Bookmarking, jumping to a specific page, and rotating the screen’s orientation manually are easy processes; however, more complicated tasks such as Dictionary look-up, Search, and note-taking proved to be quite difficult with the limited buttons and options available.

Content BookLand.net is the store for the PocketBook, and it comes with over 70,000 books for free, written mostly in English but for 30 other languages as well. Although the launch date has not been finalized, the company does intend to make available a paid book store with over a quarter of a million titles, the majority being in English.

The PocketBook works with many different formats and Adobe DRM for ePUB, so you can easily transfer the eBooks sold at other stores online. However, Amazon’s more than 400,000 books it makes available for the Kindle are far more than the EPUB selections at any eBookstore. Also, there are no periodicals included with Bookland like the Amazon, Barnes & Noble, and Sony stores all have.

The EPD uses E-Ink like the Nook, Kindle 2 and other common eReaders, meaning that reading indoors and outdoors in direct sun were both easy. Like the Sony Pocket Edition, the smaller screen means that you’ll turn more pages because every page has fewer lines, but the PocketBook 360 is comfortable enough to use that we didn’t lose interest in our reading.

The built-in accelerometer is one of the top features of the PocketBook 360. The eReader changes orientations automatically when it is turned in any direction. Switching took 1-3 seconds as we tried it out, and the PocketBook didn’t respond well to 180-degree turns, as opposed to successive 90-degree turns. We did think it was impressive that this process was successful for all but 10 percent of the time.