Last year, Sony — who pioneered the eReader market before it became trendy — came out with three new digital readers in an attempt to capture back some of its dominance. The Touch Edition, as the name implied, was the first device in the family to incorporate touch functionality, which Sony said would move e-reading closer to reading print books.

The benefits of the touch couldn’t make up for the glare-prone display and slow performance. In addition, Amazon and Barnes & Noble both lowered their prices to compete with the major electronics giant earlier this year. Now Sony enters the picture: It has released a new version of its Touch Edition ($229), and even though it has corrected many of the earlier version’s problems, is it still too expensive? 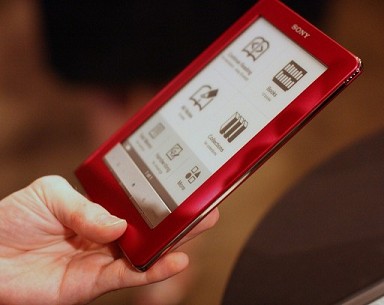 The Sony Touch Edition is slimmer and more modern appearing than the Kindle. It has a more responsive touch screen than last year’s Sony Reader. It is more ergonomically correct and easier to use. It offers an optional memory card – either SD or Memory Stick Pro. – so it can store thousands of electronic books. This device features five font sizes and good battery life. Word and PDF files (with zoom) can be read. Most images display well. MP3 and AAC audio play nicely.

Sony Touch Edition screen is still prone to glare. The screen contrast (i.e. the darkness of the letters) isn’t as good as that found on competing models. Due to the fact that there is no wireless access, files have to be dragged and dropped from a PC. The battery is sealed into the unit. The notation &markup functions are quite awkward. The USB charging function only works from a PC.

At present, the retail price of the Sony Touch Edition is $229. As it costs more than both the Kindle ($139 for Wi-Fi, $189 for 3G) and the Nook ($149 for Wi-Fi, $199 for 3G), it will be hard for Sony to convince consumers that touch capability along with a more tightly focused reading experience make it worthwhile to give up wireless. This is especially true due to the fact that it costs more than both Kindle and Nook ($139 & $149 respectively) which both feature WiFi and 3G.

A large number of customers like the convenience of purchasing books and having their library updated without the use of a computer. However, many people find it natural to operate something by touch, something this eReader plays to.

The Sony Touch Edition doesn’t differ much in appearance from its predecessors. Thankfully, Sony stayed with the overall aesthetic and weight they had. This is one of the smallest eReaders available today, measuring 6.6 x 4.7 x 0.4 inches. The display is just 6″ and the device weighs only 7.6 ounces. This makes it a bit lighter than the Kobo Wireless Reader. It is also an ounce lighter than the Kindle 3G at 8.7 ounces.

The black metal case makes the Sony Touch Edition feel solid even though it isn’t heavy, and the chrome buttons on the front and the strip around three sides give the reader an elegant look. Located on top are the power slide and SD card / memory stick slots. A holder along the right edge of the Touch securely houses the included stylus. Located on the bottom are the USB port, headphone port, recessed reset port and volume rocker.

Like the second-generation Kindle DX and 3G, Sony Readers come with high contrast e-ink Pearl displays. Previous Touch models had another layer covering the e-ink display in order to make touching work better. Sony, noting criticisms that the screen quality deteriorated because of this, took the new Touch in a totally different direction. Movements of a user’s finger or the stylus are noticed and tracked by a network of IR sensors embedded around the edge of the screen.

This makes the e-ink display crisp, bright and readable. When compared to the Kindle 3G, the Sony Reader’s text looks clearer, however the Kindle has better contrast. The Touch has a larger drawback, though: no choice in the way of fonts. Only one font is available on the Sony unit, as compared to three for the Kindle.

The UI of the Sony Touch Edition is largely unchanged. The main menu is made up of big icons created to be maneuvered with a finger and the interface is basic. The Touch Edition is very easy to navigate and understand for most people.

Appropriately for a device that has been designed for touch navigation, the elements are all a little large. This meant that we never had to struggle clicking the elements or the desired text with a fingertip. It was easier to use some of the smaller elements with our finger than with the stylus.

Adding to the improvements over the previous generation of Sony Readers is the fact that response time is greatly improved. Nonetheless, there’s still a second or two wait time between tapping a button or icon and seeing the onscreen results. This is both because of E Ink’s refresh rate and because of the software. We didn’t press buttons twice after thinking the first time didn’t register, though.

Some new features have been incorporated into the Sony Reader’s software, and many of them permit users to customize some elements of the display. If you go to Options, located in the books section, then to Adjust View, you can change the brightness or contrast to presets or your own settings.

By hitting the zoom button, you will see 6 text size options. You will also be able to select a Page Mode offering a number of options for text viewing. These include margin adjustments. Similar to the 1st Sony Touch Edition, it is possible to swipe to turn pages. Readers may also use the physical page turn buttons located on the left-hand side of the device.

We would rather have page turn buttons on either side because that would make it more ergonomic and comfortable. The swipe to turn is not very comfortable, although it is very interesting and fun. Using the Touch Edition with just one hand is made significantly more difficult.

Sony advertises that the Touch Edition’s battery will stay charged for around 14 days, but since it has no wireless connectivity, this seems very short. In our experience with this device, it had 25% of its power left, after we worked with the model for 10 days without recharging it.